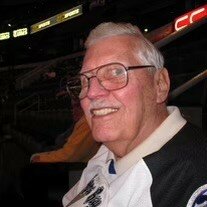 Entered into rest on October 6, 2022 at Greater Niagara General Hospital at the age of 95. Loving husband to the Late Marion (nee. Trider). Devoted father to Lori (Andrew) Kowtalo. He is survived by several nieces and nephews and furry friends. A special thank you to the nurses at 1300 Block at Greater Niagara General for all their care and compassion. A private ceremony will take place. Donations in memory may be made to Fort Erie SPCA or Alzheimer’s Society of Canada. Bill was a WWII veteran who served in England with the RCAF. He was an officer with Canada Customs until his retirement in 1984. An accomplished private pilot, an avid animal lover as well as a Toronto Blue Jays, Buffalo Bills and Buffalo Sabres fan. He will be missed.