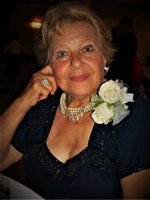 Giliberti: Chiara (aka Claire) nee Davide Chiara passed away while surrounded by love at Douglas Memorial Hospital on January 14th, 2021 at the age of 85. She is now reunited with her beloved husband Michele. She was the proud and loving mother of Joseph (Lori), Lisa Stratton (Matteo Gardiner), David (Suzanne), and Danielle. She was the devoted Nonna to her adoring grandchildren David Benner (Allison), Legh, Alannah Horner (Sean), Chelsea Stratton, Michela Stratton, Chiara, Nailah, Shiila, Max Gardiner and Lucas Gardiner. She also leaves behind her great-grandchildren Jasmine, Brooke, Logan, Violet, Lily and Myelle. Chiara will be dearly missed by her Davide family in New York State and in Italy, who were always in her thoughts and forever in her heart. Chiara was born in Calabria, Italy in 1935 in the small town of Cortale. She immigrated to Canada in 1954 to join her brother Salvatore. She settled in Fort Erie and fearlessly built a life from nothing. Chiara learned English and worked hard at many jobs. She was mainly a skilled and accomplished seamstress. She crawled and scratched her way to a level of success the young girl from the remotest of towns could ever have imagined. Chiara was a collector of all things because she truly saw the value and beauty in everything. She was the original recycler before it became on-trend. Chiara loved all people and readily made friends wherever she went. She was genuinely interested in everyone’s story and would form lasting connections with would-be strangers. After meeting you once, you forever would be referred to as “my beautiful “. Chiara was an avid gardener and had a rare and special talent to nurture and grow almost anything. She was happiest with her bare hands and feet in the good earth. Chiara loved sentimental movies, music that stirred her soul, and writing poetry. She was truly a romantic at heart and was passionate in all she took on. Mostly Chiara loved being surrounded by her family. She selflessly laboured and sacrificed so that they could enjoy a better life. Her greatest joy came from seeing her children and grandchildren happy. The family would like to convey their utmost appreciation to Dr. Csanadi for a lifetime of care, the Paramed team, Meals on Wheels, Katie Russell and Dr. Scher and the nurses at DMH, for their support and compassion in Chiara’s final hours. In memory of Chiara, family and friends are encouraged to follow her example by appreciating the simple pleasures in life that she found so beautiful. So, plant some flowers, listen to music that moves you, write a poem, cook and enjoy a good meal, call a loved one. Raise a glass to Chiara and enjoy la dolce vita. Due to current restrictions, a private family Mass at St. Michael's Catholic Church, Fort Erie, will be held. Followed by a burial at Greenwood Cemetery. For those unable to attend, a recording of the Funeral Mass will be available on the Benner website by end of day Monday. Online condolences, memories and the recorded service are available at www.bennerfuneralservices.ca